Seven thematic workshops have been held in seven planning regions as part of the project: “National Rural Parliament as a voice of rural citizens”. The aim of the workshops was to identify the priority topics in each planning region which later aggregated on national level will define the most priority topics for development of rural areas. The priorities were identified as a consensus of joint team work among public and civil sector representatives mentored by the consultant, Phd. Martinovska – Stojchevska.  Through the “rhombus” method, the participants first expressed their individual opinion, and then through grouping into teams of two, four, etc. the common priorities for the rural development in each of the seven regions were defined. The identified topics on national level will provide ground for discussion for National Rural Parliament that will be held in June 2019 as a final event of the project. 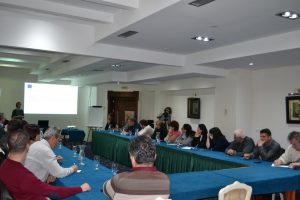 The thematic workshops have been held on the following locations: